David’s growing reputation among the people as a warrior and leader incited Saul’s jealousy, and Saul began trying to kill David. David fled from Saul in Gibeah (1) and went to Samuel at Naioth in Ramah (2), but soon Saul sought him there, and David fled back to Jonathan in Gibeah (3). After Jonathan warned David of Saul’s determination to kill him, David fled to Ahimelech the priest at Nob (4), where he collected food and Goliath’s sword. David briefly sought refuge in the Philistine city of Gath (5) and then set up his headquarters at the cave of Adullam (6), where the ranks of his army swelled to 400 men. In order to protect his parents from harm, David left them in the care of the king of Moab at Mizpeh (7) and went to live in “the stronghold” (8). After some time, David went to the forest of Hereth (9) and then left to rescue nearby Keilah (10) from some Philistine raiding parties. When David heard that Saul was coming to Keilah, he and his growing army of 600 men relocated to the wilderness of Ziph (11). After the men of Ziph betrayed David to Saul, David and his men went to live in the wilderness of Maon (12) and narrowly escaped capture there by Saul. Fleeing the strongholds of Engedi (13), David again evaded capture by Saul and refused an opportunity to take Saul’s life. David returned to “the stronghold” (14) and then to the wilderness of Paran (15). While he was there, David was again betrayed to Saul by the men of Ziph and refused another opportunity to take Saul’s life. Finally, David and his men sought refuge with Achish, the king of Gath (16). 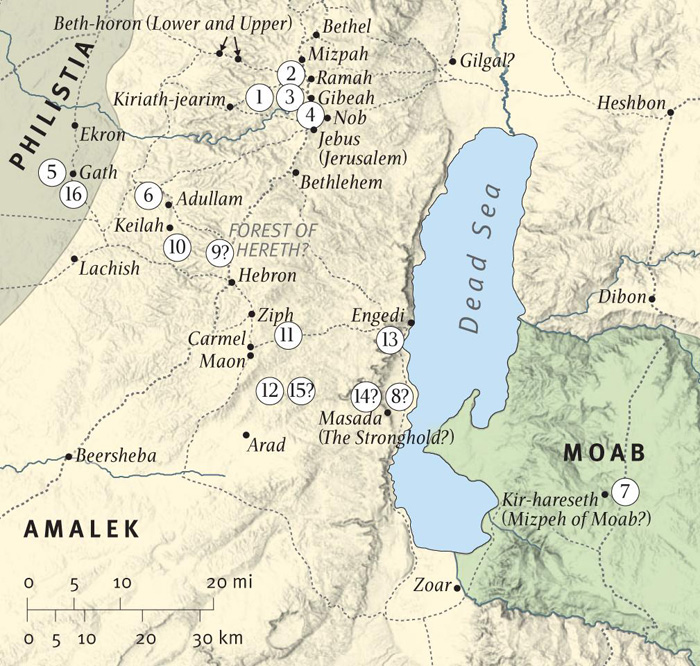