Zechariah was a prophet and a priest. He began his ministry in 520 b.c., shortly after Haggai had begun his prophetic work.

Nearly 20 years after returning from the Babylonian exile in the time of Cyrus (538 b.c.), God’s people were discouraged. The foundation of the temple had been laid shortly after the initial return, in 536 b.c., but powerful opposition had prevented any further progress on rebuilding the temple. And, there was little evidence of the kind of spiritual renewal that the earlier prophets had anticipated. Jewish sovereignty had not been restored. A moral reformation of the people had not occurred. Jerusalem was still only partially rebuilt and had no significance among the surrounding nations. Under the circumstances, many people concluded that theirs was a “day of small things” (4:10) in which God was absent from his people. Many viewed faithful obedience as useless. It seemed to make more sense to forget God and to pursue the best life possible.

The Near East at the Time of Zechariah

Zechariah prophesied to the people of Judah soon after they had returned from exile in Babylon. Several years earlier, in 539 b.c., Cyrus the Great had conquered Babylon and absorbed its territory into his empire. A year later he permitted the people of Judah to return to their homeland and rebuild the temple. Cyrus and his son Cambyses extended the Persian Empire until it stretched from Egypt and Lydia to the borders of India. 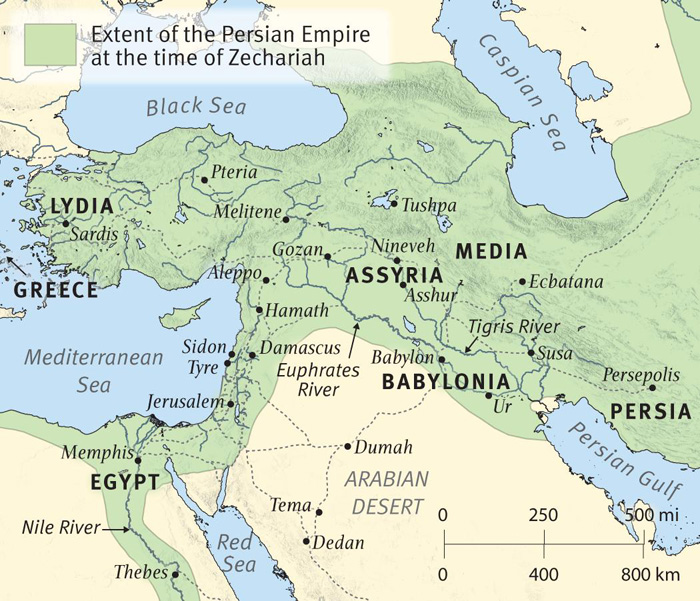