Jesus Christ is the divine author of this “revelation” (1:1). He describes coming events to his servant John. John, son of Zebedee, was the “beloved disciple” who also wrote the Fourth Gospel and 1, 2 and 3 John. Most scholars believe John recorded these visions while imprisoned on the island of Patmos in the mid-90s a.d. Revelation is addressed specifically to seven first-century churches in the Roman province of Asia (now western Turkey), but the message is for all churches everywhere.

The word “Revelation” translates the Greek word apokalypsis, which means “disclosure” or “unveiling.” Revelation unveils the unseen spiritual war in which the church is engaged: the cosmic conflict between God and his Christ on the one hand, and Satan and his evil allies (both demonic and human) on the other. In this conflict, Jesus the Lamb has already won the decisive victory through his sacrificial death, but his church continues to be assaulted by the dragon, in its death-throes, through persecution (the beast), deceptive heresy (the false prophet), and the allure of material affluence and cultural approval (the prostitute). By revealing the spiritual realities behind the church’s trials and temptations, and by affirming the certainty of Christ’s triumph in the new heaven and earth, the visions of Revelation fortify believers to endure suffering. The reader of Revelation is encouraged to stay pure from the defiling enticements of the present world order.

Revelation contains four series of seven messages or visions. These include letters to churches (chs. 2–3), seals on a scroll (4:1–8:1), trumpets (8:2–11:19), and bowls of wrath (chs. 15–16). There is a general movement from “the things that are” to “the things that are to take place after this.” Yet the visions sometimes return to subjects from the previous sections. The order in which John received the visions does not necessarily indicate the order of the events they symbolize.

The Setting of Revelation

John addressed the book of Revelation “to the seven churches that are in Asia,” namely Ephesus, Smyrna, Pergamum, Thyatira, Sardis, Philadelphia, and Laodicea, although there were undoubtedly other churches elsewhere in the province of Asia (e.g., Miletus and Colossae, see Acts 20:17; Col. 1:2). John had apparently been exiled from Ephesus to the island of Patmos, southwest of Ephesus, and it was probably there that he recorded his visions. 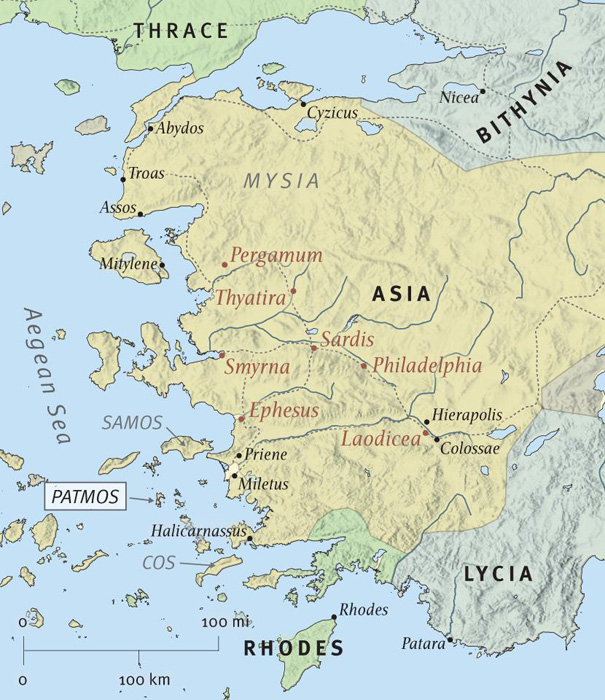