The book of Obadiah records a prophetic “vision” given by the Lord to a man named Obadiah. The only thing known about this prophet is his name. The book was probably written in the first half of the Babylonian exile, after 586 b.c. (when Babylon destroyed Jerusalem) and before 553 (when Babylon attacked Edom).

The people of Jerusalem experienced God’s judgment (v. 16a) when the Babylonians invaded and “cast lots for Jerusalem” (v. 11). The Edomites were descended from Jacob’s brother Esau and were Israel’s eastern neighbors. They should have assisted Israel during the crisis. Instead, they sided with the foreign invaders and even took advantage of Israel’s difficulty (vv. 10–14).

Holy Zion had been defiled, and God’s people were publicly shamed. Israel was devastated by the exile. Does Israel have a future? Will Zion be defiled forever? Will the plan for Abraham’s offspring to bring blessing to the world come to nothing? Will Edom and the hostile nations triumph? Is God indifferent to all of this?

Obadiah proclaimed God’s word in response to this situation. The message of Obadiah essentially spells out what Lamentations 4:22 announces: restoration for Zion but doom for Edom.

Edom, together with all other nations that oppose Israel’s God and his people, will experience God’s judgment (vv. 1–15). God’s own covenant people have been judged by their exile already. God will restore them (vv. 16–21). The book ends with the promise of the kingdom of God.

The Setting of Obadiah

Though various dates have been given for the prophecy of Obadiah, it was most likely written sometime after the fall of Jerusalem to the Babylonians in 586 b.c. but prior to the fall of Edom in 553. Obadiah condemned the Edomites, who were descendants of Jacob’s brother Esau, for attacking the Judeans during the Babylonian crisis rather than assisting them. 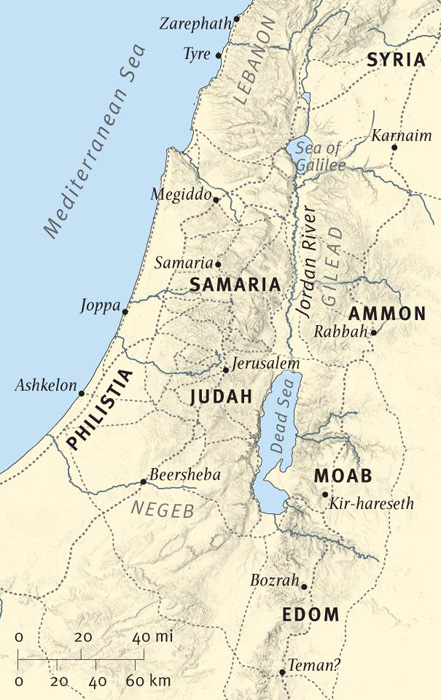