Moses is the source and primary author of the book of Numbers, which is the fourth volume in the Pentateuch. Its English name comes from the censuses in chs. 1–4 and 26.

Numbers tells of Israel’s journey from Mount Sinai to the borders of the Promised Land, summarizing some 40 years of the nation’s history. With Israel having been freed from slavery in Egypt and then receiving the law (Exodus and Leviticus), the book of Numbers begins with the people’s final preparations to leave Sinai. It then records their triumphal setting out, before a series of events in which the people grumbled about the difficulty of the journey and the impossibility of conquering Canaan. This response leads God to delay their entry to Canaan by 40 years. The closing chapters of the book tell how the people at last set out again and reach the banks of the Jordan, ready to cross into the land promised to their forefathers.

The theme of Numbers is the gradual fulfillment of the promises to Abraham that his descendants would be the people of God and would occupy the land of Canaan. The book shows the reality of God’s presence with Israel in the pillar of cloud and fire over the tabernacle. It also shows how Israel’s unbelief delays the entry into Canaan and costs many lives. Nevertheless, by the end of the book, Israel is ready to enter the land.

There were four elements to God’s promise to Abraham in Genesis 12:1–3, and they all play a role in Numbers:

Numbers consists of three major blocks of material describing the events and laws associated with three centers where Israel encamped for a significant time. These centers are Sinai (chs. 1–10), Kadesh (chs. 13–19), and the plains of Moab (chs. 22–36). They are linked by two short travelogues recording what occurred as Israel journeyed from one camp to the next.

Journeys in the Wilderness

The book of Numbers details the Israelites’ experience in the wilderness as they journeyed from Mount Sinai to Canaan. As with the exodus, it is difficult to establish the exact route that the Israelites took, but it is generally believed that they headed east from Mount Sinai until they reached the Red Sea, where they turned northward to the top of the gulf and on to Kadesh-barnea. 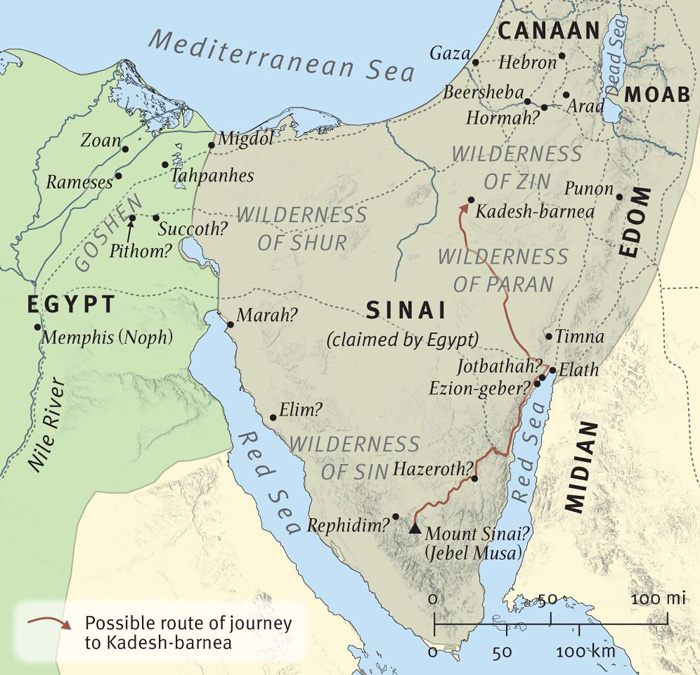