The prophet Nahum was God’s messenger to announce the fall of Nineveh and the complete overthrow of Assyria. Nahum refers to the fall of Thebes as a well-known occurrence (3:8–10). The Assyrian king Ashurbanipal conquered Thebes around 664 b.c. Nahum also predicts the fall of Nineveh, the capital of Assyria, as a future event. Nineveh fell in 612 b.c. The book was composed, therefore, between 664 and 612 b.c.

Nineveh, the arrogant capital of the Assyrian Empire, will be destroyed.

Nahum’s book is a sequel to, and a dramatic contrast with, the book of Jonah. Jonah’s mission to Nineveh was probably sometime in the first half of the eighth century b.c. (700s). To Jonah’s dismay, the Ninevites listened to his message, repented, and were spared God’s judgment.

This repentance, however, did not last beyond 745 b.c., when Nineveh became the leading military power in the Near East. In 722 b.c. the Assyrians conquered the northern kingdom of Israel. Nineveh was destroyed in 612 b.c., marking the end of the Assyrian empire.

The Near East at the Time of Nahum 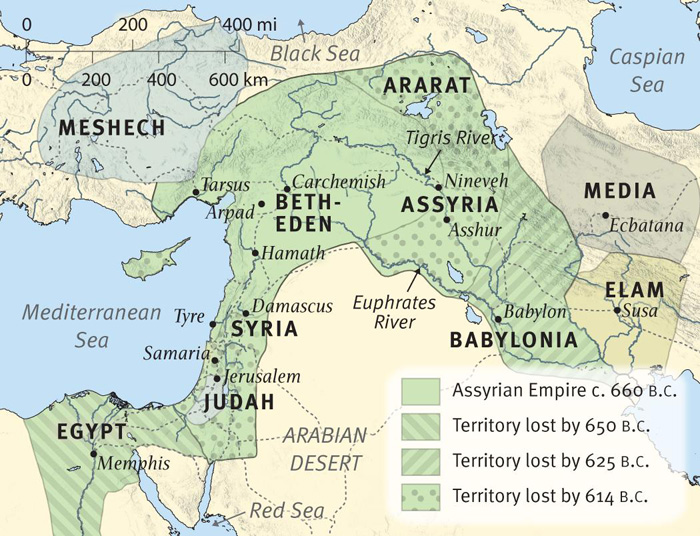