The prophet Malachi (whose name means “my messenger”) probably lived at the same time as Ezra and Nehemiah, around 460 b.c.

Malachi’s fellow Israelites were guilty of corrupt worship and unethical behavior. He called the people to renewed covenant obedience.

Malachi’s ministry took place nearly a hundred years after the decree of Cyrus in 538 b.c., which ended the Babylonian captivity and allowed the Jews to return to their homeland and rebuild the temple (2 Chron. 36:23). This was some 80 years after Haggai and Zechariah encouraged the rebuilding of the temple. Those two earlier prophets had said that the rebuilding of the temple would result in peace, prosperity, the conversion of people from other nations, and the return of God’s own glorious presence (see Haggai 2; Zech. 1:16–17; 2:1–13; 8:1–9:17). To the discouraged people of Malachi’s day, these predictions must have seemed a cruel mockery. In contrast to the glowing promises, they faced economic difficulties due to drought and crop failure (Mal. 3:11). They remained an insignificant territory, no longer an independent nation and no longer ruled by a Davidic king. Worst of all, despite the promise of God’s presence, they experienced only spiritual decline.

The Setting of Malachi

Malachi likely prophesied several decades after the first Jewish exiles had returned from Babylon to Judea and had rebuilt the temple. Edomites had migrated northwest from their traditional homeland just south of Moab into the area immediately south of Judea, which was now called Idumea. Territory that once belonged to the northern kingdom of Israel had been divided into several minor provinces, including Samaria. 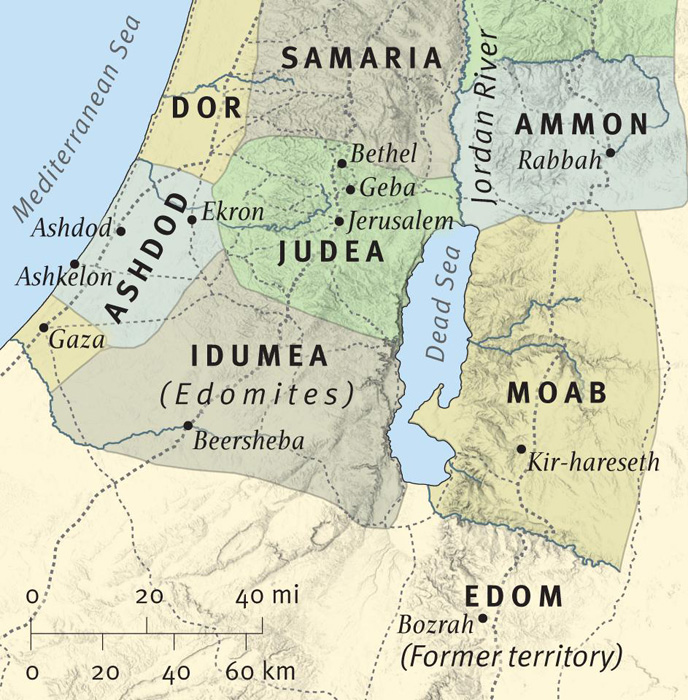 The book of Malachi describes six disputations between God and Israel. There is a common pattern in each dispute: (1) God charges his people with bad behavior; (2) he then envisages the people’s response to the charge (“But you say”; 1:2, 6, 7, 13; 2:14, 17; 3:7, 8, 13); (3) God then replies to their presumed response and expands the charge. The chart below shows the subject of each dispute and God’s response to it.