While this book mentions Joshua writing (8:32; 24:26), it does not claim he wrote the book. The repeated references to something existing “to this day” (see 4:9; 5:9; 6:25; etc.) seem to suggest that there was a significant lapse of time between the events recorded in the book and the time when the writing of the book was completed. The final writing may have taken place in the time of the exile (post-587 b.c.), but the writing probably began much earlier.

Joshua records part two of God’s grandest work of redemption in the OT period. In part one (the Penta­teuch), the Lord redeemed his people out of slavery in Egypt and formalized his covenantal love for them at Sinai. Moses led the people during that time. Now in part two, under the leadership of Joshua, the Lord brings his people into the Land of Promise and gives them rest.

The book of Joshua seeks to explain God’s purpose in the events surrounding Israel’s capture of and settlement in Canaan. Those events are seen as the fulfillment of God’s promises to Abraham, Isaac, and Jacob. Such an account would have been relevant to ancient Israel from its earliest arrival in Canaan, and to every generation of God’s people to the present day.

Joshua comes immediately after the Pentateuch and in many ways completes its story. The theme of the first five books of the Bible is the progressive fulfillment of the “patriarchal promise,” made first to Abraham (Gen. 12:1–3) and repeated to his son Isaac (Gen. 26:2–4) and his grandson Jacob (Gen. 28:13–15; etc.). The Lord promised Abraham and his descendants that they would be blessed and would become a blessing to others, that they would grow to become a great nation, and that they would be given a land of their own—and that these blessings would be enjoyed within a close covenant relationship with God.

By the end of the Pentateuch, Israel has been brought into a covenant relationship with the Lord and has become a great people. But they remain outside the Land of Promise, on the plains of Moab. Forty years before, the Lord had chosen Moses to lead his people out of slavery in Egypt and to bring them to the land he had promised (Ex. 3:6–8; 6:2–8). Now, after so many years of wandering, Joshua, the “new Moses” (Josh. 1:1–9), is to lead God’s people into the land, take it, and divide it among them as their inheritance from the Lord.

The Setting of Joshua

The book of Joshua recounts Israel’s conquest of the land of Canaan under Joshua’s command. The book opens with Joshua being commissioned by the Lord as the leader of the Israelites. It tells of his victories over the Canaanite kings and how he allotted the land of Canaan among the tribes of Israel. The book ends with Joshua encouraging the people to remain faithful to the Lord. 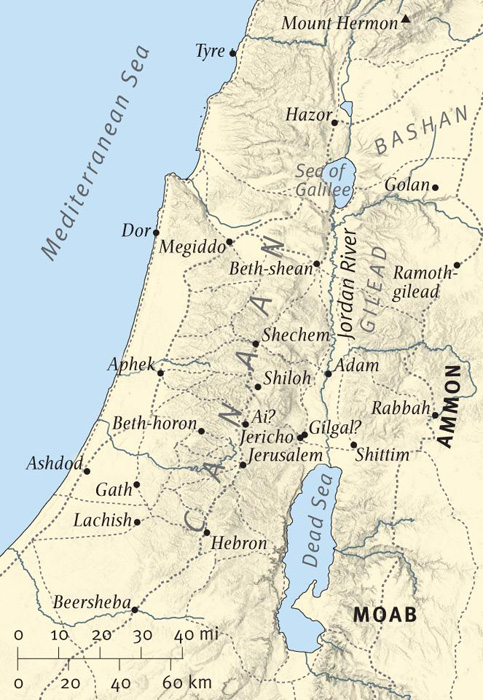