Hosea prophesied during the latter half of the eighth century b.c. (c. 753–722 b.c.). This period was an extremely difficult time in Israel’s history, just before the northern kingdom went into exile.

Hosea’s primary audience was Ephraim (another name for the northern kingdom, Israel), which is mentioned 35 times in the book. Hosea wanted to see Israel turn back to God.

Israel is the Lord’s bride, but Israel has instead joined itself to Baal, the false god worshiped in Syria-Palestine. Worshiping Baal violates the first of the Ten Com­mandments (Ex. 20:3). It is also a betrayal of God’s intimate union with his people. Therefore Hosea describes it as spiritual adultery, an offense against the marriage between the Lord and Israel. He compares Israel’s spiritual unfaithfulness to the ingratitude of a wayward wife. Such unfaithfulness justifies the Lord’s coming judgment. But punishment is not ultimately what the Lord wants for his people. He desires that they leave their sin. He wants them to return to the One who first loved them and who can provide what is best for them.

Chapters 1–3 use Hosea’s own marriage as a parable for the relationship between God and Israel. The dominant image is of Israel as an unfaithful wife. Chapters 4–14 detail the comparison, with its series of accusations, warnings, appeals, and motivations for God’s people to return.

The Near East at the Time of Hosea

Hosea prophesied to Israel and Judah during the decades leading up to the fall of the northern kingdom to Assyria. The resurgence of this ancient empire dominated much of the politics of the ancient Near East from the time of Jeroboam until Assyria’s demise at the end of the seventh century b.c. 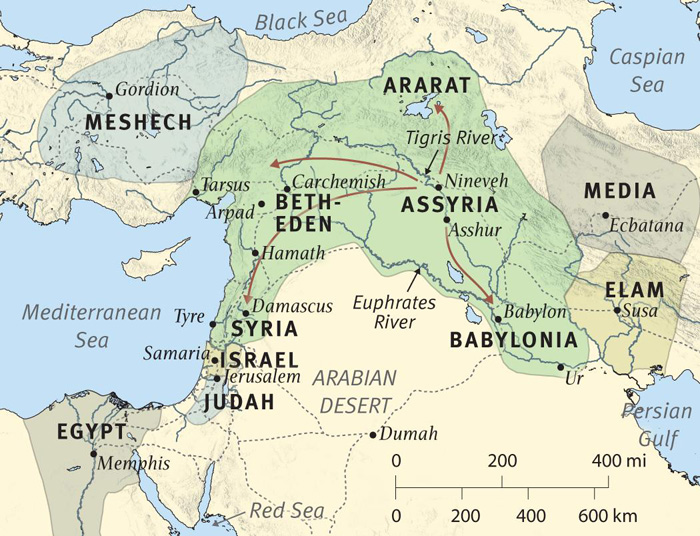