The book of Ezra never declares its author, and the book’s contents make it difficult to determine when it was written. Ezra 1–6 recounts events that occurred long before Ezra’s time. Ezra 7:27–9:15 clearly comes from Ezra’s own hand, since it is written in the first person. Ezra 7:1–26 and 10:1–44 describe events in Ezra’s time, but are written in the third person. It is possible Ezra may have combined the other materials with his autobiographical writings to form the book. Or, a later historian may have collected all the portions to describe Israelite history from c. 538–433 b.c. Many scholars believe that the same author wrote Ezra, Nehemiah, and 1–2 Chronicles. In ancient times, Ezra and Nehemiah were counted as one book. The events narrated in Ezra–Nehemiah occur over a century: Ezra 1–6 covers 538–515 b.c.; Ezra 7–Nehemiah 13 covers 458–433 b.c.

The theme of Ezra is faithfulness to the Lord, both in keeping the Mosaic law (7:6) and in worship. Because of his concern about worship, Ezra stresses the importance of rebuilding the temple.

As the people return from exile in Babylon to the Promised Land, they are under threat from the non-Jews living there. Having been driven from the land previously because of their sin, they also need to learn once again how to live in covenant with God. The land must be restored through the physical presence of God’s people, and the people must revive a spiritual commitment to serve God alone. As the temple is rebuilt and more exiles come back to the land, the people start to reestablish the nation that God had promised Abraham. As the priests return and begin to teach the people how to love God and live according to his ways, the people recommit themselves to the Lord.

The book of Ezra encourages the postexilic community toward pure worship and holy behavior. Ezra calls the people back to covenant loyalty and obedience to the Mosaic law. The book rejoices in God’s provision in returning them to the land, rebuilding the temple, and calling his people back to himself. The book also warns against falling away again through sin and against serving other gods. The remnant of Israel should persevere in hope, repent in humility, and live in obedience.

The Persian Empire at the Time of Ezra

During the time of Ezra the Persian Empire had reached its greatest extent, engulfing nearly the entire Near East. In 539 b.c. the Persians under Cyrus the Great defeated the Babylonians and absorbed their territory into the empire, including the lands of Israel and Judah (known as Beyond the River). The next year Cyrus allowed the people of Judah to return home under the leadership of Zerubbabel and rebuild the temple of the Lord. Later, around 458 b.c., another group of Judean exiles returned under Ezra’s leadership. 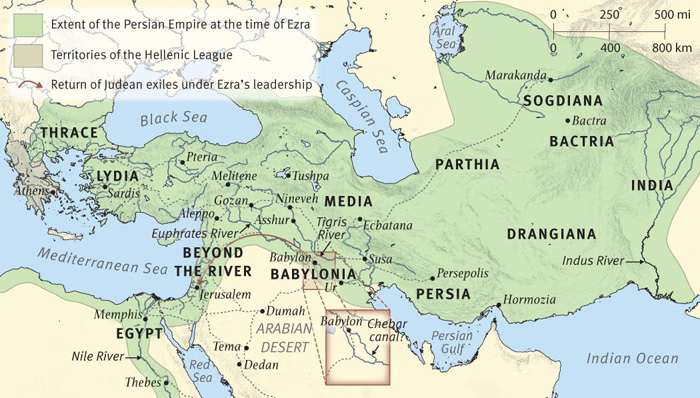