The first dated message in Ezekiel is from the summer of 593 b.c., four years after Nebuchadnezzar deported the first group of exiles to Babylon. The latest dated oracle is 22 years later, in April 571 b.c. If Ezekiel was 30 years old when his ministry began (1:1), the final vision of the book came when he was about 50.

Ezekiel spoke to a people forced from their home because they had broken faith with their God. As the spokesman for the Lord, Ezekiel spoke oracles that defended his reputation as a holy God (see especially 36:22–23). The primary purpose of Ezekiel’s message was to restore God’s glory before Israel, who had rejected him in front of the watching nations.

Ezekiel prophesied during a time of great confusion following Israel’s exile to Babylon in 597 b.c. A former Judean king was among the exiles (the 18-year-old Jehoiachin), and the Babylonians had appointed a puppet king to the throne in Jerusalem (Jehoiachin’s uncle, Zedekiah).

In times of crisis, God sent prophets to bring his message to his people. Judah’s exile was therefore a period of intense prophetic activity. (Jeremiah also served during this time.)

Ezekiel’s fellow exiles were his main audience, but his oracles also communicated to people who remained in Judah.

The Near East at the Time of Ezekiel

Ezekiel recorded his visions and prophecies while living near Babylon, where he had been exiled years earlier. By Ezekiel’s time, the Babylonian Empire had conquered almost all of the area along the eastern coast of the Mediterranean Sea. It would eventually conquer even the land of Egypt, where many other Judeans had fled. 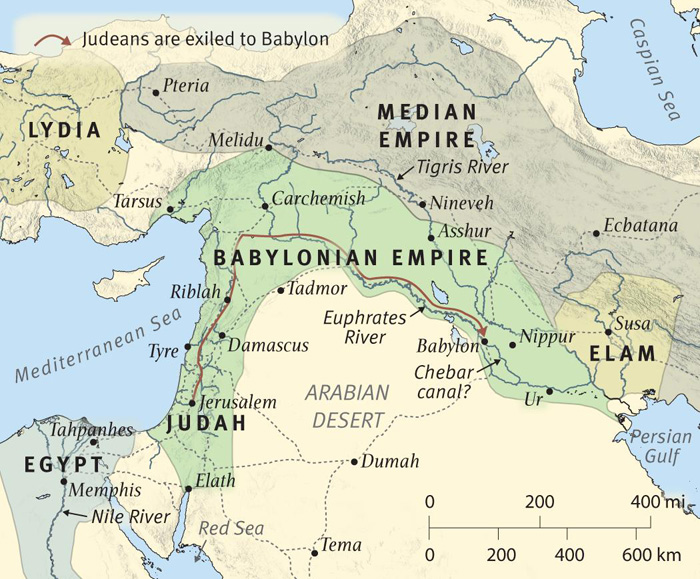