Like many OT books, Esther is an anonymous work. It is possible that the author was someone like Mordecai, who had access to historical documents (2:23; 6:1) and an interest in Jewish affairs.

Esther belongs to the period after the Babylonian exile, when Persia had replaced Babylon as the ruling power. The story is set in Susa, one of the Persian capitals, during the reign of King Ahasuerus, better known by his Greek name, Xerxes I (486–464 b.c.). Some Jews had returned to Jerusalem, where they enjoyed a reasonable amount of control over their own affairs. Others, like Esther and Mordecai, were still in exile. As a minority group, the Jews were viewed with suspicion and sometimes faced threats to their existence.

The book of Esther tells how a Jewish girl became the queen of Persia and saved her people from a plot to destroy them. She is assisted in this by Mordecai, her cousin and guardian.

Esther was written to explain the origin of the Feast of Purim and to ensure that it would be observed by all future generations of the Jewish people (9:28). It has clearly achieved this purpose, since Jews have continued to observe Purim to the present day. The book of Esther is read as part of the celebration of Purim.

Esther is part of a much larger story that runs all the way from Abraham to Christ and, through him, to the church. If Haman had succeeded, the Jewish people as a whole would have been destroyed, and the story of God’s saving work in and through Abraham’s descendants would have come to an end. There would have been no fulfillment in Christ, and therefore no gospel and no Christian church. Christians should read the book of Esther, not just as a story about the Jews but as part of their own heritage. Christians are not obliged to observe the Feast of Purim, but they are to take to heart the truth that God providentially watches over his own (Rom. 8:28).

Esther is an entertaining historical story that also reveals important truths about how and why the Jews survived such an overwhelming threat:

The Persian Empire at the Time of Esther

Long before Esther’s time, the people of Israel and Judah (later called Jews) had been dispersed throughout the Near East by the Assyrians and the Babylonians. Eventually the Persians absorbed nearly all of these lands into their empire, which reached its greatest extent during the time of Esther. Thus Haman’s plot to exterminate all Jews throughout the Persian Empire would have annihilated virtually all of the Jewish people, and Esther’s daring actions saved the whole nation from complete destruction. 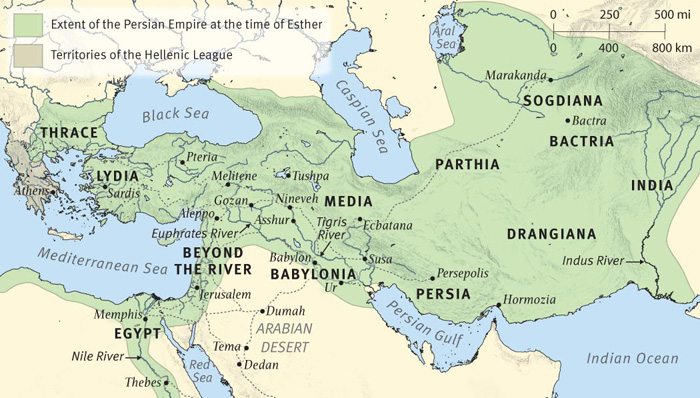