Amos was not a prophet by profession (see 1:1; 7:14–15) but nevertheless was entrusted with bringing a message from the Lord to the northern kingdom of Israel. He prophesied sometime between 793–739 b.c., probably nearer the end of that period.

The theme of Amos is the universal justice of God. The Israelites clearly expected a “day of the Lord” when all their enemies would be judged (1:2–2:5). What they were not prepared for was that they too would be judged (2:6–9:10). In fact, they would be held more accountable than their neighbors.

After about 780–745 b.c., the Assyrian Empire was unable to continue the pressure it had put on the nations of the Canaanite coast during the previous century. At this same time, both Judah and Israel were blessed with fairly stable governments. As a result of these two factors, the two nations (especially Israel) were experiencing a time of wealth and prosperity. But what the Israelites saw as the beginning of a new “Golden Age” was really the end for them. It was Amos’s unhappy task to tell them of God’s coming judgment. Within just a few years Israel would no longer exist as a nation. They would continue to exist as a scattered people only by God’s unmerited grace (9:11–15). “The day of the Lord,” far from being a day of blessing, was going to be a day of darkness. By 722 b.c. Assyria would regain its strength, and the Israelites would be conquered and exiled.

The Near East at the Time of Amos

Amos likely prophesied to Israel during the decades just before the fall of Samaria to the Assyrian Empire. The resurgence of this ancient empire dominated much of the politics of the ancient Near East from the time of Jeroboam until the end of the seventh century b.c. Assyria would eventually engulf nearly the entire Near East, from Ur to Ararat to Egypt. 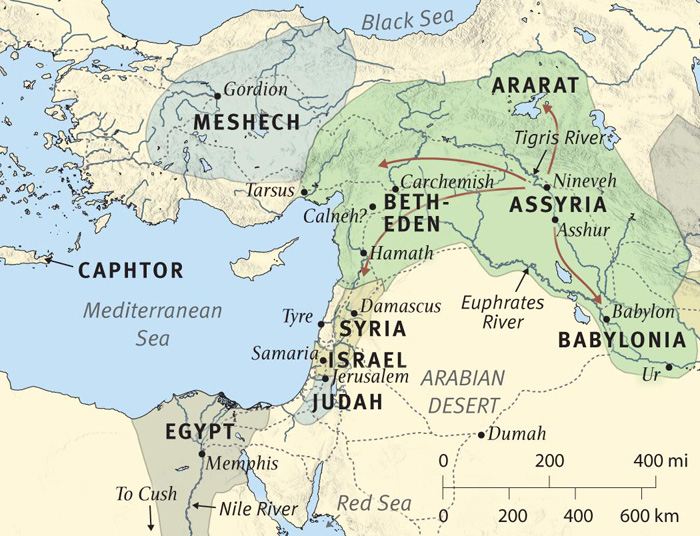