Golgotha and the Temple Mount

For many centuries, Christians have worshiped at the Church of the Holy Sepulchre in the belief that this was the place where Jesus was crucified, buried, and rose from the dead. This view was challenged in 1883 by General Charles Gordon, who argued that the Garden Tomb, a site just north of the Old City of Jerusalem, was the true site of Calvary.

In the 1960s, excavations were carried out below the Church of the Holy Sepulchre, showing that it was built on an isolated mass of rock in the middle of an extensive quarry (which was in use from the eighth until the first century b.c.). This spur of rock was left unquarried in ancient times, because of the poor quality of the limestone. In the sides of the quarry and of this rock, a series of rock-cut tombs of the style of the first century a.d. were found.

This would indicate that the area was not then included within the city walls, as the dead were always buried outside the city. In support of the second and third points, some fortified remains found in the northern part of the nearby Jewish Quarter excavations have been identified as the Gennath (Garden) Gate mentioned by Josephus in his description of the Second Wall (Jewish War 5.146). It is assumed that this gate derived its name from a garden which lay just to the north outside the gate. Indeed, a layer of arable soil was found above the quarry fill.

The claim that the site could have been known as “the place of the skull” is said to be based on an ancient Jewish tradition reported by early Christian writers, such as Origen and Epiphanius, that the skull of Adam is preserved in this hill.

General Gordon’s identification of the Garden Tomb with that of Christ was based on his discernment of the shape of a skull in the contours of the hill on the western escarpment of which the Garden Tomb is located. It has since been proven that this tomb was, in fact, a typical tomb of the First Temple period and could never have been called a “new tomb” in the time of Christ. Because of its tranquility, however, and its contrast to the bustle of the Holy Sepulchre, the site is today still regarded by many as the tomb of Christ.

The reconstruction drawing shows the traditional site of the crucifixion (that is, the Holy Sepulchre). Three crosses are shown on the Hill of Golgotha. The Second Wall of Jerusalem was built above the quarry face. The Temple Mount forms the backdrop to this view, with the Antonia Fortress on the left, the temple in the center, and the Royal Stoa on the far right. 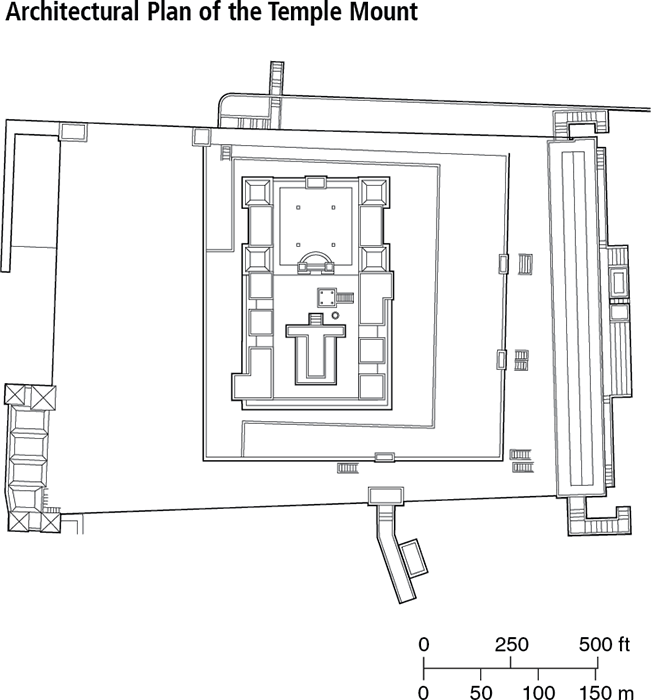