The City of Jericho

Jericho (Tell es-Sultan) is perhaps the oldest city on earth, and it is the lowest city on the surface of the planet (c. 750 feet /229 m below sea level). Jericho has undergone massive excavation work; major digs were led by Ernst Sellin and Carl Watzinger (1907–1909, 1911), John Garstang (1930–1936), and Kathleen Kenyon (1952–1958). Many important finds have been made at the site, one of the most notable being a city wall, some 4.5 feet (1.5 m) wide, attached to a monumental round stone tower. These are some of the earliest fortifications known to mankind. The diagram below portrays some of the remains from the excavations at Jericho from various periods of her history. Thus, the outer city wall comes from the Late Middle Bronze Age (2000–1550 b.c.) whereas the inner city wall dates to the Early Bronze Age (3200–2200 b.c.). Jericho was the first city west of the Jordan captured by the Israelites under the command of Joshua (Joshua 6). Whether or not there exist archaeolog­ical remains from that destruction is a hotly debated issue among archaeologists. Following the Israelite destruction, Jericho was abandoned for centuries until a new settlement was established by Hiel the Bethelite in the ninth century b.c. (1 Kings 16:34). 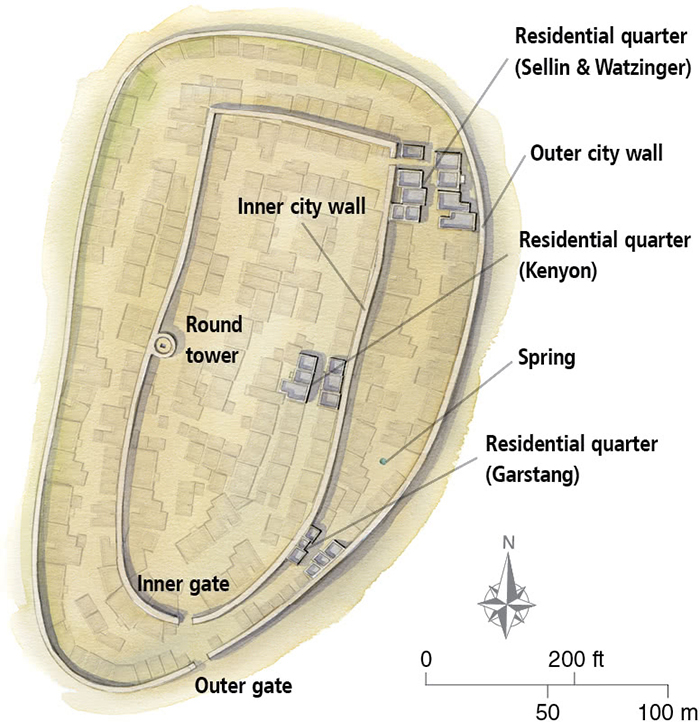