Redemptive History in the Book of Hebrews

Hebrews shows the contrast between the old covenant and the new covenant. In the old covenant, the law and its ceremonies were a shadow of the good things to come. They only reflected the reality of the “heavenly things” (depicted by arrows intruding into the old covenant). The inauguration of the new covenant is described as a change in priesthood and law that brings about a change in reality because of the cross. After the work of Christ in the new covenant, the heavenly reality (Mount Zion, the heavenly Jerusalem) not only intrudes into history but Christians actually participate in this new reality (arrows now go both ways) because the good things have come through Christ in his death, resurrection, and ascension. Christians live in a semi-heavenly age, whereas in the old covenant with its laws, rules, and regulations, people could not fully participate in the “heavenly things.” Although they participate in the heavenly reality now, in the age to come God’s people will fully realize their Sabbath rest. 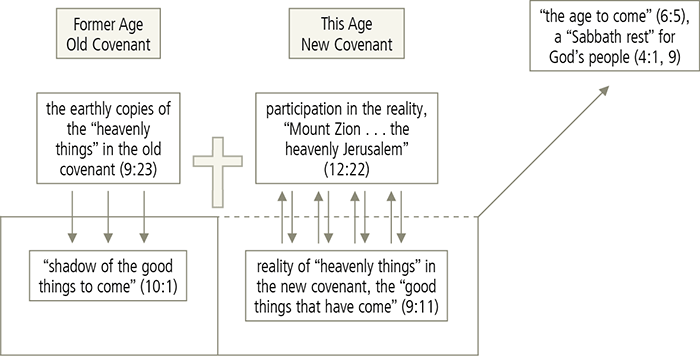