Ezekiel’s final vision of an ideal temple (and city, and land; chs. 40–48) forms a counterpart to the vision of chs. 8–11. In each case he is taken on a tour of the structure, but whereas in the earlier vision he discovers abominations and perverted worship, in this final vision all is in readiness for the perpetual dwelling of the glory of the God of Israel. In chs. 8–10 most of the movement centers on the gate structures to the north and finally focuses on the main sacrificial altar, from which central point the slaughtering angels begin their work (9:6b). In this final vision Ezekiel’s tour begins and ends at the East Gate, but passes by the same areas as those he saw in the earlier vision. With the “tour” completed, he is again outside the main East Gate as he senses the approach of the glory of God returning the same way as Ezekiel had seen him go.

The labels below are arranged from the innermost, and most sacred, area and moving outward. It must be borne in mind that “temple” can have two quite distinct references: it can refer generally to the entire “temple” complex, including the outer gates and court; in its more “strict” reference the “temple” is the innermost structure itself, which has a single (eastern) entrance and contains the Most Holy Place. 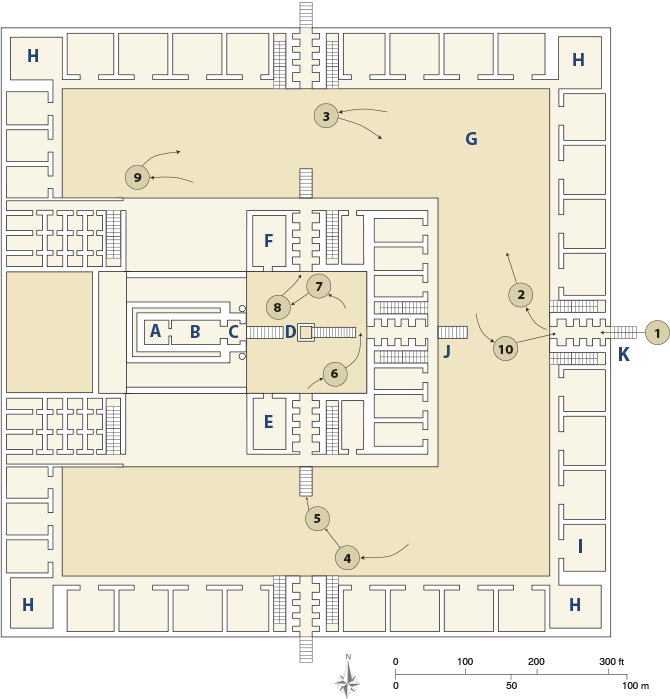 Letters in the diagram represent locations within the temple complex; numbers indicate the stages in Ezekiel’s temple tour.